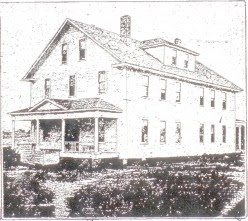 Back when Booker T. Washington was making history at the Tuskegee Institute in Alabama, a black Texas minister named W.L. Dickson was busy making phenomenal strides along the same trail.﻿
In 1900, Dickson founded the Dickson Colored Orphanage, Inc. in rural Gilmer, Texas.He had grown up on a plantation in Grimes County and learned the value of hard work.As a young adult in Upshur County, he began to pick up a few “Negro waifs who were wandering the highways and byways” and provide them with food, shelter, clothing, education and job training.He believed, as Booker T. Washington did, that manual training would help Negro youth take their rightful place in society.

By 1920, his modest institution had evolved into a boarding school for 125 homeless Negro inmates on a large sweet potato farm of more than 800 acres.There were more than twenty buildings, including dormitories for different-aged children, a “mess hall kitchen”, tool room or shed, chicken coops, a demonstration building, farm equipment shelters and classrooms.All of these were frame construction heated by wood stoves.They had a water well, pastures for mules and cows, and a steam laundry.When they were not in classrooms or participating in “demonstration work”, students did most of the manual labor as part of their curriculum.

Girls learned the domestic arts such as cooking, sewing, tending to younger children, ironing, milking and serving meals.Rev. Dickson stated that the students were taught to live up to the traditions of the Old South, and that he was not trying to turn out Negro schoolteachers or preachers, but rather Negro servants.Some of the demonstration work involved having the students learn how to wait on white people by serving one another in the classroom.While the meal was in progress, “good manners and perfect decorum” were required of everyone.

Boys were trained in agriculture, carpentry, printing, building repair and electrical work.When they had completed their grammar school training, they were often sent out into the community to bale cotton for local white farmers, as practice for their adult lives.They were also required to learn certain chores such as scrubbing the wooden floors of the buildings, tending the chickens and other animals, and helping the girls with heavy lifting.

According to an article in the Galveston Daily News, hundreds of Negro children who grew up at the orphanage had obtained “respectable” work and gone on to become “outstanding citizens of Texas”.The facility was acquired by the State of Texas in 1931 and became known as the State Colored Orphans Home.
Don't display this capsule:
Background: Only available when aligned right.

There are two ways to use this capsule. You can either choose specific products, or you can choose keywords that Amazon will use to generate a list of items. Which do you want to do?


You currently have 4 keyword products listed, which exceeds our new limit. This capsule will be limited to a maximum of 2 products if you make any changes.